Charlotte Stevenson
Waking up early is something I didn't realise I was out of shape in until today - and that was like 8am wake up, so heaven knows I am going to deal with getting up at 7am tomorrow, wish me luck!

So yes, up early and off to the freshers fair with my friend Rebecca, which was pretty great. Freshers fair is basically the first impression clubs and societies make on you so they are all scrambling to get to you first, which leads to a hall full of people excited about their clubs and societies trying to get you involved, which is simultaneously exciting and terrifying. There were lots of freebies too - including a free film club which sounds really cool. Something to do with the picture house in York so I will definitely have to check that out. There was also orchestra, a magazine offering internships, and some hiking + scouting clubs which sound quite fun to be a part of so I will definitely be looking into those, along with the York St John Sharks (swim team) And no freshers fair would be complete without all those free Domino pizzas - it's the worst day of the year to have a nut allergy, but it was still a pretty good day any way.

After the freshers fair, I headed to my first lecture of the year which was in Temple hall and absolutely packed. I knew literature would be a popular course, especially as so many people are combining it with another subject like creative writing or media, but there are 200 students taking literature which is like... a lot (great use of superlative there Charlotte!)

The lecture was mostly a welcome talk, but it still featured some pretty inspiring quotes which I think I am going to have scrawled in the front of my note books for a long time. Things such as 'writing is a powerful act' and 'the humanities have never been more important' Looking around it was difficult to soak in all the information about my new class mates and their ideas, alongside meeting all of our new lecturers, learning about what they teach, the modules we will be taking, how we can use the city to benefit our studies, how to make the city ours, how to use the online learning system and such. But the first week is always full of things so I am glad they have put this extra effort in which means we can begin our classes earlier on during freshers week and become accustomed to class so that next week we can just jump straight in with all the learning. For me the best part of the academic is the beginning because there is no way to describe the pure relief I feel when I put that pen to paper with true incentive and just take full on notes. Is that strange? Maybe that's why I'm studying Literature anyway, that obsession with writing down everything and anything.

Towards the end of the lecture, we were given some reading to do on a poet called Jack Mapanje, who will be attending part of our lecture tomorrow (so excited!) We were asked to analyse two of his poems, one of which is about travelling and the paths we take, the other of which focuses on memories, the pain of remembering and similar themes all whilst maintaining the appearance of a fish bowl and then a beach. It was some really powerful wording which made me want to live inside each of those lines. The cyclical narrative is so soothing, and at the same time so rebellious. It's just the kind of thing we need to be working on - refreshing, contemporary, teenage and not teenage. It is everything far away from condescending, it is everything close to home and important.

As for the rest of the day, it might be summarise partially by the photos above - Green tea (sampled fresh from the teapot) a trip to the Shambles and other tourist places, drinking a slush because 1. They're amazing and 2. It's a million degrees and I was melting, and finally watching the sunset from the central bridge here. It was a really lovely end of summer day - as much as I want it to be autumn, I don't think it fully is yet!

Basically, to shed a little light on the situation, I went to pick up my train tickets for tomorrow at the station and ended up finding my friends instead who came to visit from Leeds - such a lovely day, it was exactly the cherry on top of all the student based school stuff to see them. It was really intriguing to see how well I have already got to know York and how I could show them places like Museum gardens, the Shambles, the Minster and so on. The history and context was definitely my strong point though, so I am going to have to find out some more facts for different places next time they visit so that the tour doesn't get boring! Arina and Marita, my friends from Leeds, are both international students so it was interesting to hear how they viewed this city and what they have been up to over the summer. Think they liked museum gardens best: 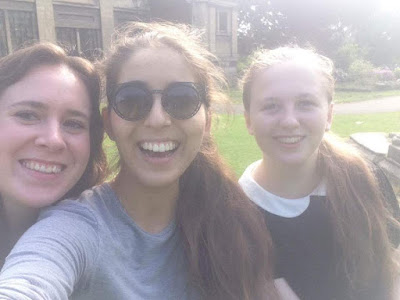 On a final note I am super excited to watch a repeat of the finals results of America's got talent tomorrow. Grace Vanderwaal's music is amazing! The whole aspect of cello, ukulele and piano in pop music is just perfect, so hearing something that she has written herself with this set up has been great.

Sponsored by University of South Wales