'Who knows what a future in elite sport will bring'

Sport has always been my passion but when I graduated from the University of Brighton in 1996 with a degree in Sports Science, there were few opportunities to work in high performance sport. I therefore spent many years working in various jobs developing my management skills which included project management, relationship management and then when joining UCAS I added communications management to my skillset. All of which proved to be essential skills for a career in Elite Sport. After spending almost 3 years at UCAS, in 2014 I was fortunate enough to secure a job as a Paralympic Podium Road Coach with the Great Britain Cycling Team. I really enjoyed my first experience of high performance sport and worked with some incredible athletes. One athlete I coached achieved a World Championship Silver Medal also went on to win Paralympic Gold in Rio. Although I enjoyed coaching I found my skills were better suited to the role of Team Manager.

In 2016 when I started my role at England Netball, we were at the beginning of the revolutionary full-time programme which in its first year wielded only 3 wins in 12 international matches. 14 months later and the same group of athletes made history winning Commonwealth Gold in dramatic fashion against the world number 1 Australia Diamonds on the Gold Coast in Australia. It was an incredible life changing experience representing my country out in Australia culminating in the best moment of my life, and something I will cherish forever. I have team managed the last 41 England Internationals and the match day buzz in front of a sell-out crowd is incredibly rewarding. 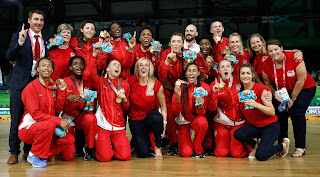 The Vitality Roses went on to be named the Sports Writers and BBC Sports Personality Team of the year, BBC Sports Personality Sporting Moment of 2018 and reached a highest ever ranking of world number 2. This international success also led to an amazing increase in grass roots activity with 130,000 people taking up or coming back to netball.

I look back on my days at UCAS with fond memories but I feel very privileged to have been on this journey over the last five years. In July 2019 we have the Netball World Cup in Liverpool which looks set to be an amazing showcase of netball and after that who knows what a future in elite sport will bring!

Get uni ready with our study skills