Friday nights are for...

Siobhan
Writing massive to do lists? Listening to my study playlist? Trying to organise my life?!

As I mentioned in this blog for the last assignment I submitted, a 2500 word report, I ended up pulling a very late night to get it finished and submitted.

I am very much a last minute worker. I often find myself saying "I work best under pressure" but I don't know if this is just because I'm the Queen of Procrastination so I've learnt how to work under pressure. Probably. I'm in a different situation to most university students though. Being a 'mature student' and juggling a full time degree course alongside a full time job isn't easy. So having pulled a late night (3:30am!!) I then had to be up at 7:30am for work! This was the least desirable thing. And on top of that, I also had a 6 hour day at uni to get through after working the morning. Let's just say, I was tired and grumpy and I consumed a lot of coffee that day.

In an attempt to avoid this, I am currently sat thinking about all the things I have to do for upcoming assignments so I can get started and avoid anymore late night shenanigans. Over the year I have used various to-do list methods...

The original
An old fashioned list on old fashioned paper. I bought a to do list from Paperchase while studying with the Open University a few years ago and it was a godsend. I would just made huge long lists, stretching over pages and pages, of the things I had to do. I liked this method for when I was just studying at home but it was just one more thing to carry around in my uni bag. So I moved on to... 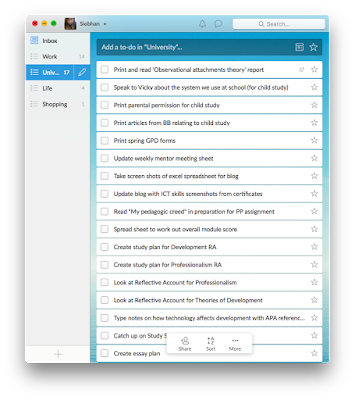 Wunderlist
Wunderlist is probably my favourite to-do app. Purely because it syncs with my phone, mac and iPad. So I can access it wherever I am, whatever device I'm using. The satisfaction I get from marking a task as done and then watching it just disappear is unreal. It's so pleasing. I also find it easier to keep track of what's left to do, as the completed tasks disappear. Whereas with a written list, you just cross them out and things can get a little messy! So this was my preferred method of writing to do lists for quite a while. 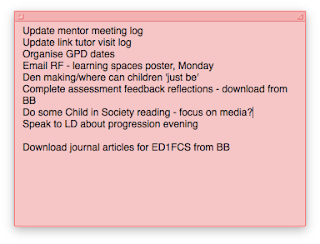 Stickies
Stickies is an app that comes standard on Mac computer, but there's also a similar thing on Windows computers. It gives you a little post it note to write on, which then just floats around on your screen. I love it, especially the fact that it always stays open, even when you've shut down or restarted your laptop. I also like that you can change the colour... I personally like to match it to my desktop picture. The only downside of Stickies is that it's only available on the computer you've written them on. But nevertheless, they're pretty useful for making quick notes of things to do.


So my jobs for this weekend are to do some reading for an upcoming essay and also a poster presentation. I've got some little bits and bobs to do as well, like filling in some forms and writing about assignment feedback I've received so I'm hoping to get all of the done this weekend too so my to do list can shrink a little.
Advertisement. Why the ads?
Advertisement. Why the ads?