One of our winners from our My Freshers Story competition.
Abi Ford 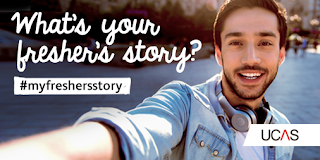 My advice? Make the first move!

OK, that sounds a little forward, but at least do it for new friendships.

This is my second time at uni, and it’s the one thing I’ve done differently. You don’t have to be super confident (I’m certainly not) – you just need to say ‘hello’ and ask a question, any question! (OK, not any question – normal social boundaries still apply!)

Honestly though, maybe it’s because I’m a ‘mature student’ (if anyone’s mature at 25?), but this time around, I’ve found my voice.

I was so nervous before starting, my head was a never-ending, anxious monologue. ‘What if I’m the oldest on my course? What if nobody speaks to me? What if nobody has similar interests to me?’ What if I stopped worrying for a second and was just myself? Guess what? Everyone is new, everyone is having those exact same concerns, and you are going to be fine! Better than fine! Just say ‘hello’, make the first move – that one word makes all the next ones so much easier to say and, mostly importantly, because forming good friendships is hands down the most important thing. The thing that can (and will) get you through pretty much anything else at uni!

#UniAsItShouldBe, students and their needs first!

Sponsored by University of Bolton