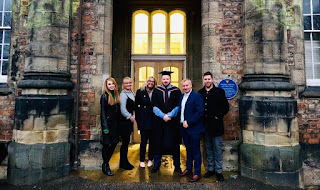 My parents wished for me to gain a trade before joining the Army
This was so that if I did join the Army, and later retire, I would have a trade to fall back on when I returned to civilian life.

So, I got a Level 3 electrical engineering qualification, and then spent a year working with an alarm and CCTV company as an apprentice. But I wanted more – so I enrolled on an Access to Higher Education course, as I didn’t have many other qualifications.

I decided that I wanted to go to university

I wanted to get a degree rather than join the Royal Engineers. After ten months of hard studying, I received offers from a number of universities, and accepted an offer from York St John to study Physical Education and Youth Sport.

When I found out I was going to uni, I was extremely overwhelmed. It was something I never thought I would achieve.

Challenges as a service child at university
As a service child, we’re resilient, adaptable, and have the ability to fit in with any social environments. However, at the time of starting my degree, my dad had retired after 25 years of active service with the Royal Engineers.

So officially, I was no longer a service child. Although I still see myself as one – even though my dad is a veteran now. I think if there were any challenges I faced, it would be the fact I was the only service child on my course, so I felt like an outsider, and that no one had anything in common with me. Everyone came to university knowing someone. But myself, I didn’t know anyone at all.

I did speak to my university beforehand about accommodation, and I also attended an open event specifically focusing on accommodation.

There is no routine in university or university life
I enjoyed figuring out my own routine, the all day library sessions, the number of different modules that I had to study, and studying CPD courses to enhance my CV.

I seriously enjoyed my dissertation in my final year. Conducting research in a field of study that I found incredibly interesting, was extremely fun. This module was essentially what my three years at university came down to. When I opened up my results to find that I had achieved a 2:1, I was overwhelmed with excitement.

Currently, I am studying for my Masters by research qualification
Again, something that I never thought I could achieve. I’m also working full-time for a company as a Residential Support Worker, caring for five adults with severe learning needs, and severe autism.

Advice to other service children
If you are in the position that I was in, at 16 years old and contemplating on joining the forces, I would say stop and think. Firstly, do what my parents recommended to me, and get a trade before you join. If you get a trade and feel that you still want to join the Armed Forces, then do it. But, if you feel that you want to progress further in your education experience, then you should 100% go for it. Regardless of prior academic achievement, it’s still possible to progress and go to university, and get a degree that will be with you for the rest of your life.

Not many people know this, but you can get a degree and still join the military, and use that degree. You can become an officer in the Army with a degree. So, essentially, you can get the best of both worlds by obtaining a degree first, and then working for the British Armed Forces.

Do university right at UWE Bristol