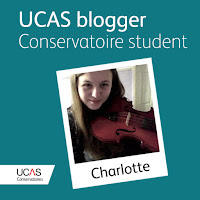 If you’re thinking of studying at a conservatoire there are many things to consider before you apply. advice to get you started but in this blog post we get an inside look at applying to a conservatoire and of conservatoire life from Charlotte Stevenson, who studies at Leeds College of Music.

What has been the most enriching part of studying at a conservatoire?

Being able to access resources that allowed me to open up my own knowledge has been one of the most enriching parts of studying at music college. Most of my hours are individual tuition based, so being able to teach myself has been a huge part of picking up skills such as proof reading and elements of music business – the resources such as the library and practice room were what allowed me to do this.

What made you decide to study at a conservatoire over a university?

Conservatoire education is more performance-based than a university and, although I admire the academic side to music, especially essay writing, I thought that the conservatoire path was better for me as a musician because it meant there was more balance between the types of classes I would have. The performance part of music is the most important element for me, so this was something I wanted to keep to as much as possible.

What are the key differences between a conservatoire and a university?

As I previously mentioned, there is less performance time with a university. But this can be really useful for composers or future composers or music journalists as it means that there is more time to practice and cater for that sort of skill. This is the main difference, and branches off into other aspects – such as, conservatoires are very close-knit communities because there are not as many students as in a much bigger university; so in some ways it can feel more like a very big family, whereas with a university there is the comfort of an environment much closer in similarity to sixth form because of the range of societies and topics studied there.

I auditioned for four music schools in total, one of them being a university. The day I auditioned at Leeds College of Music was my first audition of all. I remember that because I was nervous, my throat was dry and my heart was racing – I thought there was no way I was going to get in because everyone else got their short study score earlier than I did. But it actually went really well because once I was in the audition room, the habits took over. Practicing a lot meant that the muscle memory set in and the Italian libretto was just there already without me needing to think. When they interviewed me after the audition, they looked at my personal statement and noticed I mentioned Shostakovich symphony 5 which they questioned me on and asked me to sing the beginning of the third movement, so I did. They laughed and, when I asked why, told me it was because they hadn't expected me to actually do that. I still maintain in hind sight that this was the biggest moment of my first impression in relation to the scholarship because I had proof that I was a researched student.

Talk us through the thoughts and emotions of being accepted

Being accepted, especially with the excellence scholarship, was surprisingly not a relief at all at first. I was thrilled – but even more anxious than prior because now that I was accepted I had to get the grades. But mainly being accepted gave me the motivation to carry on working hard and making plans for the future because focusing on that factor too much made it seem surreal to me. It was the best and worst moment of my life all at once – that was how it felt.

If you could sum your whole conservatoire experience up in one sentence, what would it be?

Something I would never have expected that made me realise music is about far more than what you can learn in a class room, it is what you learn from your experiences and how you interpret that as an individual.

What would you say to someone nervously considering applying?

Make sure you are thorough in finding out about what you want: attending open days, looking at university websites, keeping a diary about the whole experience. Knowing yourself inside out is difficult at this age, because the future still seems a little intimidating and far away, but by knowing what it is you want you will be able to prepare yourself the best you can for the transition. And if you are nervous, just remember that you don't only get one chance – if things go great, then this is wonderful. But if things don't go as great as you planned, then with time and work, they will. The best thing you can do is to break the ice and apply because once you have the options before you, it will be easier to weigh up which is the best course of action for you.